So this is the first post in a long while, and hence it’s a bit of a hotchpotch. This is partly due to marathon training- I’ve increased from 4 to 6 runs per week and have covered 86 miles so far in December. Add to that a seasonal dash of the sniffles, a big show at work and everything good and bad to do with Christmas, and it’s easy to see where the time went.

Thanks to everyone who’s been voting for this blog at the 2015 Running Awards. It’s great to be on the final shortlist. You can vote by clicking on Vote/ Publications & Online/ Blog/ anotherwisemonkey here. I really appreciate it.

2014 ended with my last goal race of the year- the MoRunning Greenwich 10K. This is a relatively challenging, hilly course, but it’s one of my favourite races of the calendar as the camaraderie and support is second to none. A huge “Thank you” to Glenn Hancock for organising a team of over 160 Run Dem Crew runners; this is a MoRunning world record largest ever team, and it was such a joy to be never more than a minute away from eye contact with someone from the crew on this well-designed course.

Cheer Dem Crew were fantastic, and it was a real pleasure to join them as soon as the race finished. Giving back to other runners felt great, and stayed until the very last runners had crossed the finish line. My favourite moment was walking Rachel Bonner’s father back up the mother of all hills as he completed a 10K alongside his daughter having just flown all the way from Oz two days before. 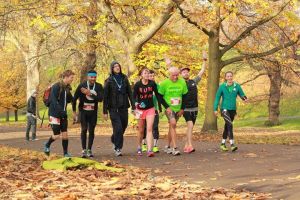 My friends James Poole and Claudia Schroegel launched Advent Running this December. The concept was simple- run every day from 1st to 25th December for 30 minutes. The idea was featured in The Guardian and really took off, with over 1000 people taking part across the globe. It’s been inspiring to see everyone’s posts in the online community, and there have been spot prizes every day for the best photos. Expect to hear more from them in 2015.

Finally, I’ve begun training for Paris Marathon this month. I’m really enjoying it and am reading an excellent book called Advanced Marathoning, from which I’m learning a fair bit about nutrition and other aspects of training. It still feels strange running at a much slower pace than when I was training for 10K, but I’ve been able to handle the increase in mileage pretty well, and for the first time in my life I’ve made stretching after the run (including foam rolling) a regular habit. It’s hard to see where I’ll find time when I’m back at work to fit in 3 core training sessions per week in addition to the 6 runs, but I’ll do my best. I’m looking for some races to enter in the run up, and currently thinking about Brighton Half in February. Any ideas?

Shout out to Sarah Waite for the MoRunning photos.