Today, in the scorching sun, we ran, cheered and celebrated Hackney, my friends and I, in a celebration of community by community and through community. Hackney took me into its arms when I needed a new start in life. Years later, so did Run Dem Crew. So it was fitting I should run the first mass-participation race in Hackney surrounded by the family I’ve chosen. END_OF_DOCUMENT_TOKEN_TO_BE_REPLACED 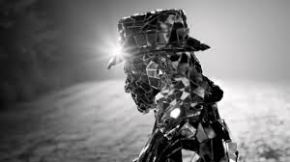 If you get a chance to see Arcade Fire this summer, take it. UK readers can catch them at Glastonbury and Hyde Park. Their current tour offers a spectacle on a scale similar to U2’s Zoo TV tour of the early 90s.

The major theme of the current album and tour is mirroring. At Earls Court, in addition to the main stage, there was a B stage towards the back of the arena, and the show began with Mirror Man (see above) dancing on the B stage while the band set up behind a curtain on the main stage. This clever change of focus caused a sea of mobile phones held aloft to change direction to capture that shot for their owners’ Instagram feeds. Suddenly, the curtain fell on the main stage, phones faced front and Mirror Man was forgotten as the opening bars of Reflektor rang out.

Social media allows us to direct and edit the movie of our lives, making us the director of our Warholian 15 minutes of fame. I grew up with Madonna, the queen of media manipulation, and in this day and age many of us are now also adept in these arts. Sometimes, we risk missing the moment through our eagerness to capture it and receive the ego-boost that accompanies a volley of social media likes. Arcade Fire, like all bands, benefit from this hugely, but they are a band who have forged a career out of being unashamedly themselves. The band-members look like normal people, in contrast to the airbrushed wannabes of the next manufactured pop sensation. Ironically, One Direction were the other big show in London last night. Through songs like We Exist, individualism was celebrated and media-perpetuated notions of beauty were challenged during this show. Heady stuff for a rock concert, and many will have completely ignored this narrative in favour of simply enjoying the beltingly good rock songs played with fire and passion by an incredibly talented band of multi-instrumentalists.

My favourite perfomer in the band is Regine Chassagne. She is a real force of nature, and her passionate singing, musicianship and stage presence were a highlight of my experience. The woman I one day marry will possess passion, creativity and energy like Regine. A highlight was her performance of It’s Never Over (Oh Orpheus), which took place on the B Stage, backed by a battalion of Thriller-esque dancing ghouls, as she and husband Win Butler serenaded each other in arcs of sound over the heads of the ecstatic audience.

Arcade Fire are a post-modern band, able to pilfer hooks from 80s classics and build them into anthemic, swelling choruses. I’m so pleased Azra insisted we take a spot right up by the stage, as the kinetic energy of the band’s live performance could be directly and intensely felt so much better there. The energy as the band sang the word “Hey” in No Cars Go was sheer joy.

The closing song, Wake Up, was one of those magical moments of communion in the live arena, where everyone became part of one singing, swaying organism. It was stadium rock at it’s finest. Arcade Fire are a truly big band now, but there’s been no compromise over their artistic integrity, and they rewarded their fans last night with a spectacle as wonderful as their music.

This was a fitting way for Earls Court to bow out as a venue, as it is set to be redeveloped into so-called affordable homes. The sound was excellent and there must have been a huge backstage crew to facilitate such a great experience. Support acts Lorde and 2 Many DJs fulfilled their roles admirably, and the tickets were good value for money.

I leave you with the set list, and this image, courtesy of Azra, taken as the confetti canons exploded overhead during the finale. To see a band like this at the height of it’s powers is a rare opportunity. Catch them while you can. 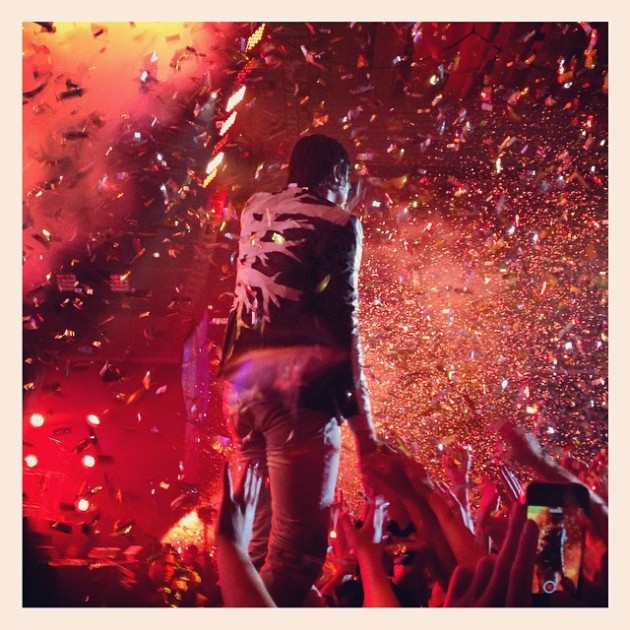